Jeremy Tok and his associates focus their entire energies on delivering a superlative fit and silhouette, crafting suits of beauty and integrity in the time-honoured tradition of bespoke tailoring.

We are organised to allow tailoring to be done as a craft in a quiet, low volume, low overhead operation, forgoing maximum revenue through maximum visibility in a mall or busy commercial centre. Your order is given personal attention by people for whom tailoring is both a career and a passion. Your personal patterns are drafted either by Jeremy Tok himself, or under his direct supervision. A substantial amount of tailoring takes place on-site.

Unlike others who produce almost only jackets in the half-canvassed construction, which is a low-cost and compromised product, Jeremy Tok produces predominantly fully canvassed jackets.

In the area of fit, we aim for near perfect front and back vertical balances. Only so can the hourglass silhouette fully manifest itself. The other advantage: the fronts of the jacket hang close to the body when unbuttoned, as opposed to splaying open. This goal by itself makes us unique among Malaysian tailors.

The suit—the most sophisticated garment in a man's wardrobe today.

The suit is universally worn today whenever the occasion demands something courteous, as in business meetings, or when the attire needs to inspire a sense of occasion, as in weddings. The tailored suit lends the occasion a special significance. The suit is there to mark the milestones in a person's life: confirmation, graduation, wedding, the first and subsequent job interviews, etc. But even in everyday life, the tailored jacket is a versatile companion. With its superb ergonomics due to its highly evolved cut, its many pockets both outside and inside, its high quality cloth which creates a pleasant microclimate next to the body, and its structure which gives definiton to one's appearance, the tailored jacket is very suited for many facets of life, either in business or for leisure. Very little in the suit suggests any specific culture or geography—it is universal.

For the most formal attire still in common wear---the tuxedo---head over to here.

But the suit is also the most technically complex garment made today. The challenge the tailor faces is to bring out the potential inherent in this complexity -- its potential to flatter; its potential for comfort; and its potential to be a very special piece which you are glad to own.

This understanding shapes our processes and techniques. There is a light animal hair canvas through the entire length of the jacket fronts. From the chest upwards, a stiffer horsetail canvas is used. In the shoulder region, there is a bias-cut piece of horsetail canvas.  Each layer of canvas which form this composite of canvasses have cuts at specific places. When material is taken out at the cut, a dart is formed. When material is added, a vee is created. Both the dart and the vee, as well as the hand stitches which hold all the layers together give the canvas composite a shape typical of the traditionally made tailored jacket.

The lapels receive particular attention. The canvas here is affixed to the underside of the lapel with hundreds of hand stitches to give it a superior characteristic and appearance.

Every buttonhole is sewn by hand, with those at the cuffs being functional. Buttons are made of genuine buffalo horn. In the interior, linings are made of cupro. There are three interior pockets with the option of double compartment pockets for better segregation of home and local currencies and documents. The entire perimeter which forms the front edge of the jacket is pick stitched by hand.

A little Introduction to Cloths

Dipl.-Ing. Jeremy Tok has been a full time bespoke tailor since 2012. He was previously project manager for operational improvements at the Malaysian subsidiaries of German manufacturing companies. He graduated with a Masters in Mechanical Engineering from the Technische Universität Ilmenau in Germany, having done internships in the Project Management Office of the Airbus A380 development project with Airbus GmbH in Hamburg, and on the enterprise-wide supply chain restructuring project at Claas KGaA which subsequently won the 2007 Deutscher Logistik-Preis. His Masters thesis was also written as part of this project at Claas.

He lives in Bukit Tinggi, Pahang amidst green hills and clear streams. He commutes to KL almost daily.

Ask for an appointment 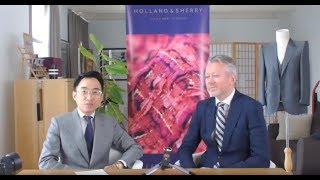